Why Put Pennies in Our Piggy Bank?

I built JamesBaquet.com for four purposes:
This last one depends on raising modest amounts of money, first to help us get a little house, and second to keep us in grocery money once we're there.

So we'd like to ask you to put a few pennies in our piggy bank.

If you think this is an outrage ("Why does he want my money?") read on. 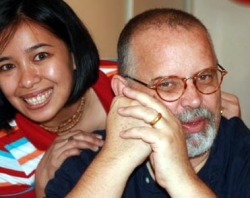 Here's my wife, Lila, and me at her grandmother's last birthday party, outside of Manila. (Photo by Lila's niece Hannah, aged 8.)

We live a simple life here in South China. I live in my school's dorm; she lives in her company's dorm. She comes here on weekends.

I spend most of the week writing. I have lunch out once a week with a "spiritual buddy"; otherwise, I eat at home. On weekends we eat out once or twice.

We have no car. No mortgage. No debt.

As long as we live in China, the money's OK, and we're saving some.

But eventually, we want to live in the Philippines, near Hannah the photographer and the rest of Lila's family.

For that, we need your help.

I am a teacher, not a businessman. I do not have a company. Virtually everything you see on my websites was done by me.

It takes a lot of time. But I think it's worth it.

If you think so, too, please consider making a donation. You can read more about the "whys" below. Or you can just stop here and help us out.

The "James and Lila Want to Settle in the Philippines" Fund

Let's face it: I will probably never live in the States again.

Oh, I love America, sure. I think the openness of our society is in many ways unique, and I am thankful for it. When I took Lila for a visit in Jan-Feb 2009, she, too, was struck by the beauty and ease of living there.

But despite the many frustrations of living in a developing country, there's something here that fosters development in me. As outside, so inside? Furthermore, after spending the summer of 2008 in the Philippines, I'm pretty sure "dat mus' be da place."

First, the cultural mix. There are indigenous peoples in the north, Muslims in the south, ancient Catholic churches and an earthy Catholic practice everywhere, Chinese temples throughout the islands, and an overlay of American culture (English is widely spoken).

Second, because of that last point, there are English bookstores and libraries everywhere.

Third, my wife "belongs" there. There's family and good connections.

Fourth, though the weather is hot, it's a damned cool place. Lots of art and design, poetry and performance, veg foods and Eastern religions. Not to mention it's dead gorgeous (once you leave the cities, which have their own kind of "charm").

Fifth, because of her economy, the Philippines has lots of opportunities where a little time, a little money, a little expertise can make a LOT of difference. I'd really like to get engaged in volunteer activities there in a way that I haven't been able to in China (due to language, the system, etc.).

Finally, it's an incredibly cheap place to live--nothing to sneeze at for a man in his 50s with no retirement plan.

The only drawback is a law of economics: If a place is cheap to live, there's usually not much money to made there.

What's to be done?

How about making a living off the internet? How about:
All this is possible through the wonders of this interwebthingy.

So support our mission. Participate in our adventure. Make a donation.