James in a Nutshell

I was born in the City of Angels, on the shore of the Peaceful Ocean. Yup, L.A. BABY! On the Pacific.

I grew up in the suburb of Rosemead, where my older brothers, my younger sister, and I all attended the same elementary, intermediate, and high schools.

Meanwhile, I became a "born-again" Christian; got married; became a high school teacher, and then an elementary school principal, and then a high school teacher again; went to Anglican seminary for a couple of years; got divorced; began exploring other religions; moved to Japan; and finally, in 2001, returned to Rosemead, where I studied for a PhD in Buddhism (but did not finish my dissertation).

Leaving my studies in 2004, I moved to China, where I live now. For three years I taught in a polytechnic college in Shenzhen, near Hong Kong; then I went to Yangzhou, Jiangsu (between Nanjing and Shanghai) for a year to live in a temple and teach monks; then back to Shenzhen and the polytechnic, where I work now.

In 2005, the best thing that ever happened to me...um...happened to me: I met Lila Jose, a smart, funny, spiritual, beautiful Filipina. We got married in 2007, and dream of someday relocating to the Philippines. This homepage will, hopefully, be of some help in making that possible.

In the image above, you see ten images, ten moments where a camera captured the flow of my life. Over time, I will be telling you stories--in a piecemeal way--from various parts of my life (through the Blog, the Essays, the Columns, and even the E-Courses). But here you can get a sense of how the pieces fit.

Referring to the numbered key above, these ten parts are:

1. Infancy: I was born a sickly child (after my twin miscarried), and the bets were on me not making it. Yet, as you can see in Picture #1 above, I was still capable of raising a sickly smile. There's not much to say about an infant's spirituality: they know everything there is to know, and when people ask about my current "spiritual quest," I often say that I just want to know what I knew before I started school and "they" taught it all out of me.

2. Pre-school: Not shown in this photo are my two imaginary friends, Marky Spenders and Johnny Housemaker. Did I just have a wild imagination?  Or is there some chance that children with "imaginary" friends aren't imagining them at all, but seeing something that, as we get older, we're taught not to see?

3. Elementary: Kids aren't supposed to have dark circles under their eyes. I did. I was still "puny" (as my dad called it), and school was always a struggle. "He's so smart," the teachers would lament, "if only he would apply himself." Nearly a half-century later, I'm still hearing the same damn thing.

4. Junior high: At age 12 or 13, I had my tonsils out, and in recovery I swallowed my tongue, bringing my lungs to a halt. An alert nurse got me going again, and when my family filled me in on what happened, my mom also told me about my miscarried twin. So, at the age when young people in more traditional cultures are being initiated, I developed a deep sense of having cheated death--twice. In fact, I was formally initiated at this time; I was confirmed in the Episcopal church.

5. High school: Lots of people claim that high school was "the best years of their lives." Not me. As always, school was too hard, my social standing would best be described as "gregarious loner" (still largely true), and while I knew there was something more than this material realm, I just couldn't see it, even with those big geeky glasses. 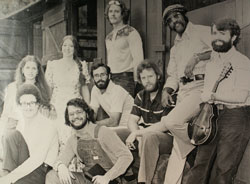 7. First Marriage and Early Teaching Career: At the age of 26, I graduated from university (finally), got married (not so finally), and started teaching. I'm still teaching. But as most men in their 20s, I was pretending to be mature, playing the "climb the ladder" game. At 29 I became a school principal, but then went back to teaching four years later.  And at 35, I became "single again." Cue the Mid-life Crisis. 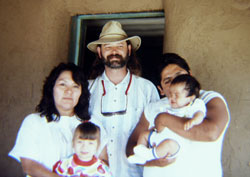 8. Post divorce: The Indiana-Jones-wannabe-in-need-of-a-haircut is me. During this period, I dated a TV star, lived with a couple of actors and their children, and soaked up as much of the native spirituality of the American Southwest as I could. This head was cut out of a pic (right) where I'm standing on the front porch of an adobe house in Taos pueblo with a family who had befriended me. It's a good indication of how, at this point, I was stretching beyond my "little world."

9. Japan: I stretched so far, in fact, that I ended up a few years later in Japan. Here I began to delve seriously into Buddhism, and I completed numerous pilgrimages. (You can read about the biggest one on my Temple Guy page.) Japan is a fascinating place with wonderful people, but it did force me out of my comfort zone in a dramatic way. It challenged me so much that I took up formal studies in Buddhism when I returned to the U.S. During that time, I also worked in language schools with Asian students, and worked in a Chinese temple near L.A. All of this kept me happy as my "Asian connection" persisted. 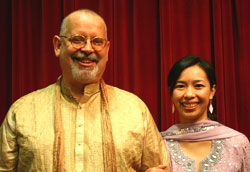 10. Today: Finally (so far) I came to China. As I mentioned briefly above, I have been teaching English here--mostly to technical students, but for one year to Buddhist monks in residence in a temple, and occasionally to other Buddhists, such as an awesome week in the mountains in Fujian province teaching over a hundred kids.

And in April of 2007, I married Lila, who is far better than I deserve, and we are now working hard to shape our lives into something that sustains us: more thinking of spiritual things, more healthy food, more pleasing music, more incense, more good friends (and fewer annoying ones).

And eventually, a life that is freed from the tyranny of having to be in any particular place, as long as there's an internet connection to keep us in touch with our income.

Send me an email!

Thank you, your message has been sent